I remember that day well. I had almost drown while surfing in the hidden cove. The waves took me under and I was thrashing around at the bottom and had no idea which way was up and which way was down. It didn’t matter, as I was being pummeled mercilessly and told myself not to panic or I’d start sucking in water.  I suppose there are worse ways to die, but while it’s happening you are never really ready to concede no matter the aesthetic. It’s like a surprise birthday party in all the wrong ways.

There is nothing like the sensory pleasure of falling off a surfboard into the cold Southern California ocean as you tumble under the surface for what seems like an eternity and surface gasping for air. I was reborn as I violently broke the surface–blind luck and another bullet dodged in a moment of equal measure grandeur and folly. I dragged myself across the caramel-hued sand, chest heaving heavily and astonished to still be in one piece as the sky was making that brief transformation that comes every evening at twilight.

My girlfriend had brought the New York Times, a large umbrella, and a few adult beverages. She looked amazing in her bikini, and I was jealous of the sun glistening off her light-brown cocoa skin like a forbidden sanctum while my own pasty coating was sucking up skin cancer like a flophouse on future consignment. My lust was transparent. We were hanging out mere feet away from where Charlton Heston filmed the iconic scene with the Statue of Liberty in Planet of the Apes. It was well known to locals, but you had to climb a small stack of sharp, craggy boulders to enter the VIP room.

“Did you know that most “friendships” are only reciprocal 53 percent of the time?” said the girl as she emerged from stray thoughts and tugged at her top–revealing quite more than a sliver of sun-kissed cleavage.

I sat for a minute quietly thinking about my own life and the relationships that had come and gone–always cutting deceptively dark and deep. I supposed that I had never seen any sort of friendship as “forever” because of my own abandonment by my father. Because of this thought, and the anxiety of the inevitable, perhaps I never put the time or the effort into friendships that I should have. I simply exhausted all avenues and then quietly moved on with little care. Shadows of the past. Funny how that happens–one minute you’re dying, and the next…disastrous self-scrutiny.

“Looks like your favorite player was traded,” she said.

“Those damn dirty apes,”  I thought. They went and did the inevitable –so how could I be shocked or angry? “They’ll love him in New York for about, oh, 15 minutes.” (Gray was 15-16 over the lower part of 2 seasons before being exiled to Cincinnati for a package of hot dog buns)

Echoes of the past rumble through my head as I gazed upon the murderous waves crashing in deadly syncopation. I loved to tempt the laws of probability as a reaffirmation of existence. I dragged the surfboard slowly to the water and the previous thoughts disappeared as suddenly as they came. I didn’t like revisiting the past– and the way the waves were looking today, perhaps I didn’t have a future either.

We lost to the Tigers in game 5 AGAIN….and sure, it hurts… yet I was prepared for this. Sure, like every other fan there was self-induced bravado and the predictable ” Justin Verlander isn’t as good as he used to be” sort of talk. But deep down in my decrepit soul I knew better. The A’s are 1-12 since 2000 in elimination playoff games. That’s A LOT of nail-biting, fist clenching, teeth gnashing and over all screaming your head off until you feel like an asshole…all for naught. So I felt a bit at peace. I accepted the Japanese word “Shoganai,” which if translated means “it can’t be helped.” The philosophy states that if something is out of your control it is better to accept it and move on. This was the ONLY was to watch this game in a semi public setting without looking like a psychopath, so I accepted the philosophy, drank a beer, and sat down to watch the game that was being played in the concrete monstrosity where I first pissed in a trough.

The first 3 innings go by pretty well, goose eggs across the board. It all turns into a giant shit sandwich when Miguel Cabrera takes Sonny Gray deep into the left stairwell for a 2-0 lead.  This is the point in time when you get that “oh fuck, not again” feeling. Ok, buck up buttercup…it’s only the 4th. Verlander is on fire…he’s spotting pitches and also getting a strike zone a foot off the plate outside by umpire Tom Hallion. I know we’re fucked…and we are. Verlander  pitches a perfect game until a Reddick walk in the 6th, and a no-hitter until  Cespedes base hit with 2 outs in the 7th. Detroit had already scratched another run across to make it 3-0 by then. I know the game is pretty much over, yet I fancy myself a super fan, so I listen to announcers Don Orsillo and Dennis Eckersley (sorry Eck) suck Verlanders dick for the next hour. I can’t even begin to tell you how many times I heard, “he’s really on tonight” or “he’s got so much in his arsenal.” Usually when I watch a game I prefer the Vin Scully approach…some tidbits of information about the city the player grew up in, some inside baseball information or perhaps a joke or two.  Couldn’t you lay off another “his breaking ball is devastating” and perhaps tell us where Jed Lowrie grew up!? Or maybe the hardships Yoenis Cespedes had growing up in Cuba? A lot of the people watching playoff baseball are fair- weathered fans, and I could only imagine their boredom when these guys talked about Verlander ad nauseam.  Fuck, it bored me and I’m a diehard.

There is much debate by the announcers as to if Justin Verlander is the second coming of Jesus Christ himself. Apparently Jim Leyland doesn’t think so, as he brings in Joaquin Benoit to close it out in the 9th. A couple of guys get on, and suddenly Seth Smith is up with 2 guys on and 2 outs. A homer ties this one. One brilliant, deep, soaring tater into the Oakland night, and this game is tied.  I’m paying attention now, I’m imagining what I am going to do WHEN it happens. He then proceeds to hit a lazy fly to Torii Hunter as I watch worthless GM Dave Dombrowski celebrate behind the Detroit dugout. The disappointment  doesn’t sink in for a while. I’m not angry, just quiet. I go to get some of that organic pizza that all the kids are talking about.  Congratulations TBS, you got what you wanted…a RedSox/Tigers A.L.C.S. We’ll be back again though, trying to fuck up your television ratings …like we always do. 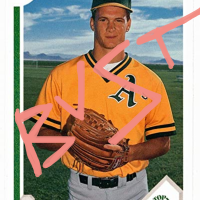