“Baseball is an orderly universe, and that appeals to people who see disorder in the universe.” –Bill James 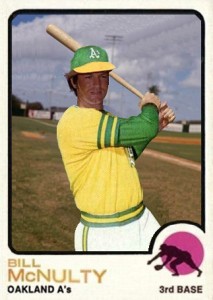 Got his only knock off Nolan Ryan

Breezy night. Moths fluttered and slammed against a lonely streetlight in the massive, darkened parking lot next to an antiquated football stadium. Earlier in the evening I had attended a photo exhibition/art show which was a prelude to the sanctity of the parking lot to smoke a joint with my friend, Bret. We had been invited by an ex-girlfriend with emotional wreckage and psychological traumas  from places I would never go; or care to. Life is always a shifting cast it seems, and here she was again, always cold and ever-present with a sexually ambiguous haircut. We gobbled up the free food and drinks eagerly. It all had the veneer of a high school graduation with proud parents hovering, shouting, drinking cheap wine and making congratulatory post- show dinner plans. These are the nights that crawl by at a snail’s pace. This being a community college, far from academia, there was the obvious “mystic chatter,” theatrical hand motions, and desperate attempts at narrative. Taking a break from this thing was imperative.

“Thanks for dragging me out of there. I felt like I couldn’t breathe.”
“No problem and no shit.”
“I suppose no man is impervious to the charms of a beautiful woman, despite their…fallbacks.”
“No judgement here, my friend,” said Bret as he spit out of a tiny bit of wayward reefer.
“This is Hughes Stadium, right? Didn’t the Sacramento Solons play here?”
“Yeah, 1974. They converted it into a baseball stadium and it was sort of a joke. I used to come here a lot with my dad…yeah, I’m old you sonnuvabitch.”
“You’re practically an antique,” I said jokingly. “Your only goal in life should be to outlive the national mortality rate.”
“Some guy hit a bunch of homers that year, over 50 I believe.”

When I’m stoned I tend to get bleary eyed, staring at everything but nothing, and here I was entering the wormhole and researching this mystic “50 homer guy.” Turns out his name was Bill McNulty and in 1974 he had an impressive 55 ‘taters, although most of them were “cheapies” because of the converted football stadium and the 233 foot left field line: perfect for a right-handed pull hitter. This wasn’t a “band box,” it was by my estimation a toddler’s crib. McNulty was also born in Sacramento, as I was, and writer Joan Didion before us. Interestingly enough, there was a also a stint in Hollywood as he had a bit part in a movie, 1985’s No Big Deal, starring Kevin Dillon, (Matt’s little brother) as typical of his brother in a “tough-guy with a heart of gold who got a bad rap” roll, playing a troublesome teen getting out of juvie and dealing with an alcoholic mother while trying desperately to get his shit together.

Mr. McNulty had exactly ONE major league hit: It was for the Oakland Athletics and it was off of some guy named Nolan Ryan, a soft single in which none other than Reggie Jackson was thrown out at the plate. And just like that, another ball-player is ripped from the “blanket of obscurity” and breezes into the catacombs of my mind as legend. There are so many beautiful things surrounding us if only we would take the time to look around every once in awhile.

1) 1979 was obviously a horrible year for you and the Athletics as you had bursitis in the heel and the A’s lost 108 games. How did you deal with the difficulties?
I fractured my left thumb on my pitching hand early in the 1979 Spring training in Palm Springs, CA. I know I did because I received in the mail a copy of the bill from the insurance company the diagnosis from the doctor which state I had a probable fracture of the left phalanx. Needless to say I altered my pitching motion which brought on the bursitis in both Achilles tendons especially the right heel. It was a miserable year after having two good prior years.
2) You were once involved in a brawl with Darryl Porter who later called you a “crazy, immature punk.” Can you talk a little more about the situation and how it came to be?
Our team was on a ten or twelve game losing streak, I told my team mates that I was going to start a fight. Darryl Porter hit a grounder to Dave Revering which he took it unassisted. When I saw that Rev was stepping on first I did a George Atkinson on Porter while he was running down the first base line. I did the act in a very discreet manner which didn’t draw any attention to myself. Porter became enraged an attacked me which allowed the whole Royal team to jump on top of me. Needless to say Porter got thrown out, Tony Armas hit a three run homer, and I got out team back on a winning streak.
3) You struck out Reggie Jackson twice in your 4th M.L. appearance. Is it true that he was enraged at the situation, and what was your approach?
​I was a punk, Reggie was classier, after striking him out I yelled a colorful expletive at him which went like this. “Take that MF.” The next day my pal Michael Norris acted as a liaison between me and Reggie.
4) Did you have friction with manager Billy Martin? Why did he refuse to use you in spring training, and is it true that he barred anyone from playing catch with you?
The articles were correct concerning my interactions with Billy Martin. Darryl Porter was correct I was an immature punk and I didn’t handle my interactions with Billy very well. After saying that I will say that Billy was one of the best managers that I ever played for.
5) You are an educator in Arizona today…what do your students think about your playing career past?
They like it, having the opportunity to tell them stories gets their attention. I don’t teach my students’ I promote benefits on being a learner. Once a person realizes that they can do it on their own then I look for more benefits to promote.