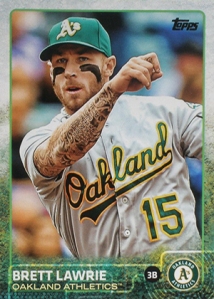 In the news: Donald Trump and his xenophobic rhetoric and unrealistic, infantile threats of massive bombing have been dominating the attention span of talking heads recently. I am a member of one of the most pessimistic and ironic generations that has ever roamed the earth–Generation X — so all of this is difficult to process as I can’t get past Trump’s silver-spoon-since-birth shitty bourgeoise attitude and makes me laugh/makes me want to kill someone psychedelic hairpiece. It’s also offensive that the man is using death, suffering and a public existential crisis to further his own political agenda; not caring a lick about working class struggles or fears. Truly a sickening individual with no ability to conceive the reality that average Americans face everyday. “Condemnation without investigation is the highest form of ignorance.” – Albert Einstein

MLB’s alcoholic circle jerk known as the Winter Meetings took place in Nashville and new Oakland G.M. David Forst harkened back to the early days when teams would try to find the drunkest guy in the room and then proceed to pilfer him for great players on the cheap. Forst recently lived up to that generalization when he traded Brett Lawrie to the White Sox and in exchange the South-Siders sent minor leaguers RHP J.B. Wendelken (AAA) and LHP Zack Erwin (A) to the A’s. Neither was on the Sox’s list of Top-30 prospects. This trade was a head-scratcher because of its insignificance.You would think that the Oakland ball-club would try to squeeze something more appetizing out of the Sox because of their desperate attempt to pick up ANYONE better than Mike Olt

at third base. Let us take a pause… we’ve now traded Josh Donaldson for 3 minor league pitchers, 1 major league pitcher, and a very young (albeit in theory future superstar)short stop. Forst just pushed the button on the evaluation of the that ill-fated trade even further. Lawrie? who knows…he probably called out Beane for not stocking the vending machine with free sodas. (this may be an inside joke to the clueless, hello Dave Justice!) Joking aside, the trade may have been a desperate attempt at dumping “Tweaker” as there have been whispers about Lawrie being a clubhouse nuisance after not one teammate stepped up when was drilled early in the season by Kansas City.
Something tells me the A’s will be okay without Lawrie, and that moving on was the hard-boiled thing to do. Lawrie will always be seen by this blog as a hard-nosed player with a serious hitch in his swing, horrible plate approach and is partial to tattoos and copious amounts of energy drinks. With Lawrie you see the sweat, blood, tears, screams, anger, defeat, triumph, joy, sadness and a .299 OBP. (probably the real reason why he was traded.) You see every bit of it. But unfortunately individuals with freakish athleticism don’t always translate well to the baseball field. Just ask Michael Jordan.