“As a friend once said to me about getting old: what a strange thing to happen to a little boy.”–Paul Auster

My grandfather took me to my first baseball game at the tender age of 10. There was no literal hand-holding, strategic explanations, or silver-spoon procurement. That just wasn’t his style. If I wanted to figure out the game I had to do it myself. If I wanted some food, well, here’s some money and go fetch it. There was Darwinian Law in effect here, and as far as I know, no child had ever been abducted at a baseball game. The law of averages were on my side, however, as I was left to my own devices, fortuitously discovering a piece to the puzzle while creating soon-to-be-clouded, timeworn memories in that long-ago foreign land known as the 1980’s.

There was very little small talk and every so often the solitude would be broken by the snap of a Bic lighter touching a Marlboro cigarette. This was a time before the fancy new novelty stadiums with their retractable roof, craft beer, gourmet food, and yuppies making corporate deals in skyboxes. One afternoon a woman was nailed in the head by a foul ball and a group of freedom-loving, scurrying, rat-children (who would hang around the opposing bullpen before games to brutally heckle the starting pitcher while the ushers smiled with approval) gathered around what resembled a murder scene. She was battered and bloodied in the aisle, and it looked as if she had been shot in the forehead. There’s nothing to see here, said her husband.

When I eventually had to go to the bathroom I was astonished as men were herded in like cattle to a room that smelled like beer, cigarettes, and vomit, all the while whipping out their dongs publicly to pee in what can only be described as a “large rectangular sink.” I would rather die than make a side-glance. Your very life depended on staring at that tiny pin fragment of wall in front of you. You had to embrace yourself in the warmth of your own microcosm for a moment before the vigorous shake, shiver, and hasty exit. Never acknowledge another’s hose/existence while in this slippery and pungent world that seemed to encapsulate the sporting event as a proletarian undertaking.

I’m going to miss the Oakland Mausoleum when it’s gone. It’s exactly what I look for in a baseball stadium. A classic feeling, a potent memory, and a working-class nostalgia. A piss trough in a dirty bathroom, hustlers selling unlicensed knockoffs in the parking lot, a hotdog on a stale bun, overpriced Budweiser, the faint smell of marijuana, broken plastic seats, and a field open to the high blue sky and blazing Northern California sun.

Just as my grandfather used to watch games.

21 thoughts on “An Ode To The Coliseum” 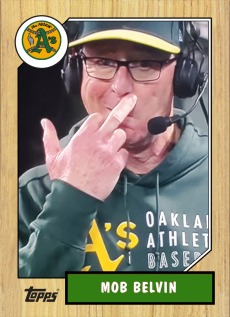