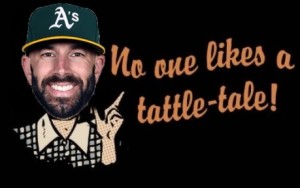 Baseball, in its never ending quest to mind-fuck, has presented me with more questions than a Jim Morrison midnight acid trip on a Santa Monica beach during the apocalypse of the Four Horsemen while a werewolf rubs salt crystals on his body and howls at the moon.

In the baseball scandal of the decade, protagonist Mike Fiers announced that his teammates, the Houston Astros stole catcher signs electronically during their 2017 World Series title, relegating the team to the moral garbage heap of Pete Rose, Barry Bonds and the 1919 White Sox. Every ill-informed gas-bag has thrown their opinion into the fray, and I suppose I must do the same considering that I subscribe to both.

The above offense certainly slanders baseball’s unwritten rules, and the Astros should be punished accordingly. The coaches that knew about/masterminded the offense should be suspended for life or fired, but the World Series title shouldn’t be taken away (although Yankees and Dodgers fans may disagree) as that would cause even more confusion and would destroy what little credulity the average working class fan has in a large, money-hungry conglomerate such as MLB. Let this be a reminder and momento mori for what little integrity there was in America’s Game. Commissioner Rob Manfred, largely ornamental and as interesting as a piece of blank paper certainly has a conundrum of epic proportions on his hands.

Fiers and the Astros will forever be tangled in a 21st century sociological courtship of slander, deceit and moral ambiguity…until the next scandal. The whole ball of wax is exhausting, tiresome and seemingly never ending. Welcome to big league sports and modern day capitalism.

6 thoughts on “The Ass-tros prove to be ass-holes”